The Mission of Trinity-by-the-Cove Episcopal Church is to spread the Good News of the Gospel and provide a loving and compassionate environment for the continuing transformation of a life in Christ Jesus. We believe this journey is shaped by God through worship, learning, friendship and service to others. 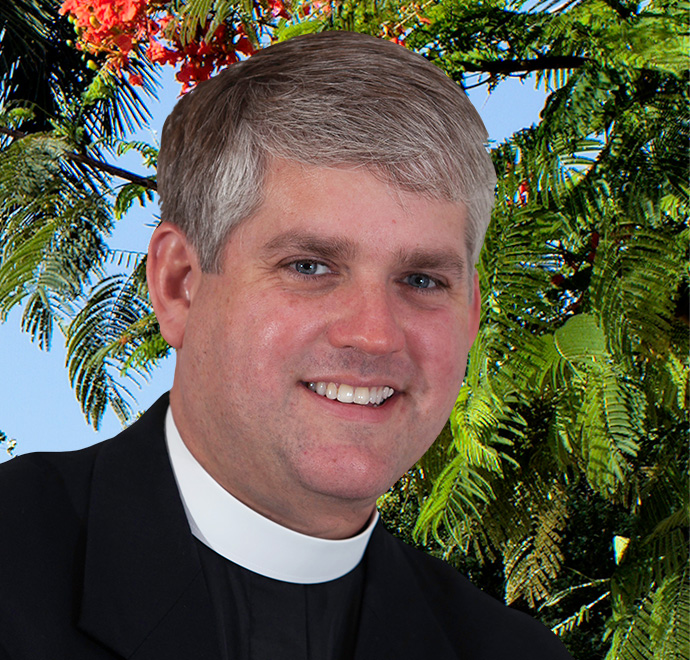 There is something electric about being a part of a Christian community that spends time together discerning God’s will for our lives and the world and at the same time simply enjoying being in fellowship with one another. Trinity-by-the-Cove is a thriving parish with wonderful and varied opportunities to love God and neighbor.

As an ordained priest, I am privileged to spend my life serving God’s people. I believe that ministry—whether ordained or not—should be personal and filled with love. That ministry is expressed through talking to people about God and sharing the powerful presence of Jesus in times of overwhelming joy and tremendous sorrow. Remembering daily how God is at work in the world and in each of our lives excites me. It’s also exciting to lead Trinity-by-the-Cove in its mission and ministry to be a loving and compassionate environment for the continuing transformation of a life in Christ Jesus.

Father Steve is an assisting priest at Trinity-by-the-Cove. After graduating from Virginia Theological Seminary in 1978, Fr. Steve served as a curate at St. Marks, Palm Beach Gardens, and in 1980 he became Rector of All Saints, Grenada, Mississippi where he fostered a ministry of outreach to the neediest people in the community and expanded his interest in adult formation. In 1986, Fr. Steve became Rector of the Chapel of Saint Andrew in Boca Raton, where he developed “The Faith-Seeking Journey” a program of new member ministry.

Most recently, Father Steve served as Priest-in-Charge of Grace and St. Stephen’s Church in Colorado Springs, where he was elected Rector in 2011, and served until his retirement in 2014.

His duties at Trinity-by-the-Cove include assisting with pastoral care and sharing his Faith-Seeking Journey program with us for Adult Formation later in the fall. Fr. Steve has a wife, Kathy, and one son, Jonathan, who lives with his wife, Paulita in Colorado Springs.

Nicholas comes to Trinity-by-the-Cove having earned a S.T.M. from The School of Theology at the University of the South in 2018. He also received a B.A. in philosophy and music from SUNY Geneseo in 2005 and a M.A. in theology from Gordon-Conwell Theological Seminary in 2008. In the years between his two stints at seminary, Nicholas stayed home to care for his first daughter, taught in the philosophy department at Christopher Newport University, and discerned God’s call to parish ministry. Nicholas and his wife, Jessica, grew up in the northeast, having lived in New Jersey, upstate New York, and Massachusetts, and, most recently, in Virginia and Tennessee. They have two daughters, Julia and Hannah.

From my very first encounter with Trinity-by-the-Cove, I was deeply moved by the idea of a community committed to living in to the fullness of our life in Christ through beautiful worship, excellent teaching, warm hospitality and fellowship, and compassionate service to others. It is truly exciting, however, to see this vision as a lived reality in the parishioners and staff at Trinity-by-the-Cove.

God has acted decisively in Jesus to bring about his kingdom. He also continues to act in and through his people to spread its influence both in our lives and in the larger world. It is exciting to play a role in God’s unfolding story of salvation and to walk alongside fellow Christians as we see, more and more each day, God working in our lives to accomplish his good purposes.

John hails from Indianapolis, and received his early training as a choirboy at Trinity Church, then as an organ student of Robert Hobbs, organist of Christ Church Cathedral there. He was student director of the 80-voice Shortridge High School Choir; accompanied silent films at the public library, and was pianist for a rock 'n' roll vocal quartet, The Delrays. He attended Wesleyan University in Connecticut, majoring in contemporary French literature, and, as a sophomore studied the organ in France with noted organist-scholar André Marchal. After college, he went to the newly-formed College of Church Musicians at the Washington National Cathedral, headed by composer Leo Sowerby. He earned the degree of Master of Sacred Music while teaching music and French at St. Albans School.

He was assistant organist at the Washington Cathedral under Paul Callaway for four years, and then traveled to England for a year’s study under Allan Wicks at Canterbury Cathedral. He was appointed organist and choirmaster of Grace Cathedral in San Francisco, a post he held for thirty years. He is an Associate of the American Guild of Organists and past dean its Southwest Florida Chapter, and is a member of the Association of Anglican Musicians. He has been organ soloist under the batons of Carmen Dragon, Arthur Fiedler, Jean-Pascal Tortelier, Edo de Waart and Seiji Ozawa, and has been on the faculty of numerous choral conducting conferences. He and his family came to Trinity-by-the-Cove in 2003.

Working with people who love what they’re doing: both the staff and the congregation.

I believe that down through the ages, music has been a secret evangelizer. It is, however, impossible to prove this or quantify it. Certainly, many people have come into the church through the door of music. My mother was an inspiration to me; she once wrote, “sometimes a descant can slip past the guards, and touch a hardened heart.”

Carrie joined Trinity by the Cove in February, 2020 and brings a wealth of experience in managing office operations; including member relations, process improvements, and budget management.  She and her husband moved to Naples in 2016 to follow their dreams.  She got to know the area well while working in the county parks, overseeing recreation centers and capital projects.  Before moving here, Carrie served as the Operations Manager for the Autism Society of Indiana.

On the weekends, Carrie enjoys exploring all the wild areas of southwest Florida, hiking and kayaking in the local, state and national parks.   Because of her love of adventure and service, she and her husband recently went to Mongolia to build a playground for an orphanage.  They traveled with a small group of people to build the playground and train the local residents how to build their own, so the good work would keep on giving.

There are many things to be excited about at Trinity by the Cove.  What first caught my attention is that Trinity by the Cove is so much more than a place of worship, it is a community that reaches out to lift up all those in need and supports many organization all through Collier County, and around the world.  I knew I wanted to be a part of that.  As an educator, I love that Trinity has a strong focus on youth and adult education.

I have always tried to live a life in service to others, volunteering for any organizations throughout my life.  I am at my most happy and fulfilled when I am helping others learn new things and achieve the goals they wish to achieve.  I look forward to the opportunity to learn, grow, and lead here with a wonderful staff and an embracing parish community.

A rare native of Naples, Katie was baptized and married at Trinity-by-the-Cove. Katie lived in Kansas for 10 years and attended Kansas State College where she met her husband, Dave. Too many cold winter nights helped them decide to move to Naples in 2003 to be closer to family. She worked with disadvantaged children before being hired as Staff Assistant at Trinity. Katie and Dave are parents of a 5 year old daughter, Hazel, and twin boys, Woody and Harlan, and are enjoying the exciting life of parenthood!

I am proud to be a part of this wonderful family who are dedicated to the commitment of helping others, both within the parish and the community.

To have the opportunity to serve those I work with, as well as parishioners, in any capacity I can.

Paula was born in Detroit, Michigan, and moved to Naples in 1970. She primarily resided in Naples, but has spent two years in the Mission Field in New Mexico where she fell in love with the West and visits as often as she can.

The "giving" attitude of the staff and parishioners is a joy to be around. In the time I have been a part of Trinity-by-the-Cove, I have been overwhelmed with awe to see the giving spirit that abounds and I am truly blessed to be a part of the Trinity family.

Serving the Lord with the time and talents He has given me. Numbers are not just something you use to do math; numbers are absolute truth. Search the Scriptures for all the times you see a number used and you will be amazed at the meaning behind those numbers.

Su is originally from Massachusetts and is a lifelong Episcopalian with ministry from ranging from acolyte, junior choir and junior altar guild to vestry, stewardship chair and junior warden. She is a graduate of Wheaton College in Norton Massachusetts with a BA in Psychology. She has worked in finance, marketing and sales for both large and small companies. She joined trinity June 2015.

It is awesome to work with Trinitarians on projects, and be part of excellence.

The ability to combine my gift - the love of being a good steward in support of others ministry.

Trinity by-the-Cove is very intentional about welcoming all people of all ages. When young families visit and see the atriums (rooms) for Catechesis of the Good Shepherd, they are immediately attracted to our children’s formation program. Trinity by-the-Cove also plans their services around the formation hours so children may attend worship. Intergenerational events are held quarterly so there is a relationship of acceptance and support within all age groups, and young family socials are held each month to further build community and lifelong friendships.

From a very young age, I believe God has called me to work with children. I find my joy and peace through relationships with others, so am particularly grateful to Catechesis of the Good Shepherd which not only uses my gifts but also continues to bless me and the children as we fall in love with Jesus the Good Shepherd. I have other sheep that do not belong to this fold. I must bring them also, and they will listen to my voice. So there will be one flock, one shepherd.” John 10:16

Stay in the know!

Join our email list and receive updates and special announcements.